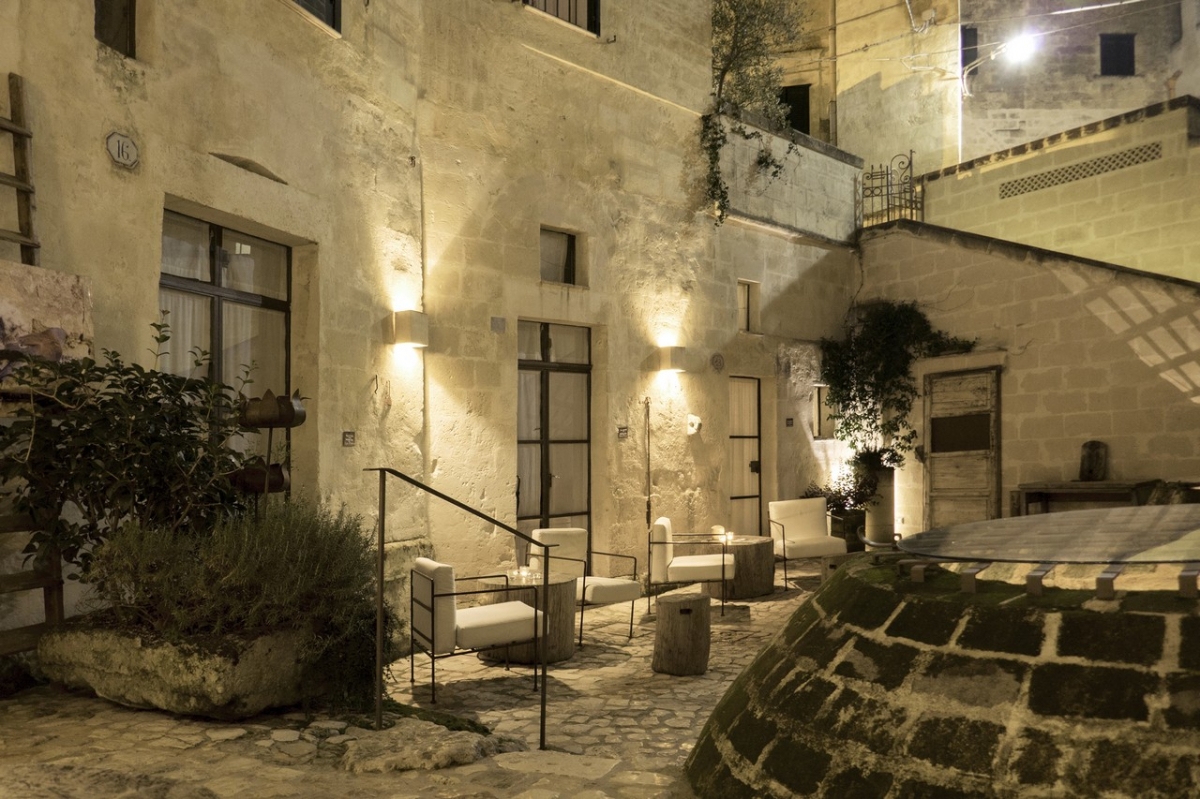 
Overview
In the heart of the ancient Rioni Sassi, a number of abandoned and disused structures, dating back to the 1600’s, have been restored and “reinvented” to accommodate the new spaces of a Borgo Albergo Diffuso (“Dispersed Hotel”) –  the Corte San Pietro. The passion of Fernando and Marisa Ponte aided by Daniela Amoroso, a young Materan architect, gave birth to the project.

Superfluous elements and other modern “contaminations”, such as layers of more recent modern floorings, have been eliminated and the texture of the original, ancient tuft walls and vaults have been restored and highlighted. This historical structure has been laid bare and is an architectural testimony –  a point of interest and topic of discussion for visitors. In our search for the essence of authentic and pure spaces, free from the superfluous, we were inspired by the “Wabi” spirit, created by Axel Vervoordt.
Historical and seductive spaces have been harmoniously combined with comfort and a refined and elegant design. The old houses on the ground floor have been transformed into refined hotel rooms, overlooking a courtyard which, thanks to the patient work of recovering the original pavement (the so-called "chiancarelle"), has been returned to its former glory.

The courtyard, illuminated by candle-light, becomes an evocative and cozy place of warmth and “protection”. From the entrance on Via B. Buozzi, as if entering into a private residence, you will be welcomed at the finely furnished yet cozy Reception area, from which you may access the private internal courtyard.

The rooms are strictly monochromatic, characterized by earth tones ranging from beige stone to brown wood and iron cortèn. Earth, terracotta tiles and the natural color of the rock become walls, ceilings and seats. The constant search for a link between the interiors and the surrounding landscape has given life to the interplay of local stone, wood and iron that is repeated in every room, in different proportions, following a linear and minimalist design. Rustic style and shabby-chic elements, take on a light and modern air. From the skillfully hand-crafted wooden doors to the rooms, light filters through transparent linen curtains, softly illuminating the first environment of each room – intended as a living room and relaxation area. The more private spaces towards the back, carved out of the rock, are instead illuminated by small windows placed up high on the vaults, the so-called "wolves’ mouths".

These high windows create directional beams of light, alternating with large intimate and suggestive areas of shadow.
Tuft arcs introduce the bathrooms, intimate and enveloping spaces, characterized by niches and cavities that accommodate large bathtubs and stone showers. The furniture, with the exception of the linens, is made up of old restored furniture and antique recovered objects. Nature and recovered objects find their place in every room, as antique chestnut chests become doors, shelves or tables, structures of old wooden chairs become multi-use containers and sections of old tree trunks become seats or bedside tables.
The entire hotel develops horizontally around slightly gradated courtyards onto which the rooms, the reception area and the breakfast room open, while other rooms open onto Via San Pietro Caveoso, giving guests the unique experience of “living” the ancient Sassi neighborhoods.

There are eight ancient cisterns below the Hotel – underground chambers characterized by their traditional bell shape, evidence of the ancient water “harvesting” system that once existed and an excellent example of sustainable development.

Add Venue to Favorites
Area Info
Matera, in the region of Basilicata in Southern Italy,  is Italy's latest "Hot-Spot".  It is a town of ancient  cave dwellings first settled thousands of years before Christ.   In the last few decades it has been transformed from one of italy's poorest towns to rock-star fame and one of the most popular destinations in Italy.

It's fame has been propelled by:

- The site of the latest James Bond movie. 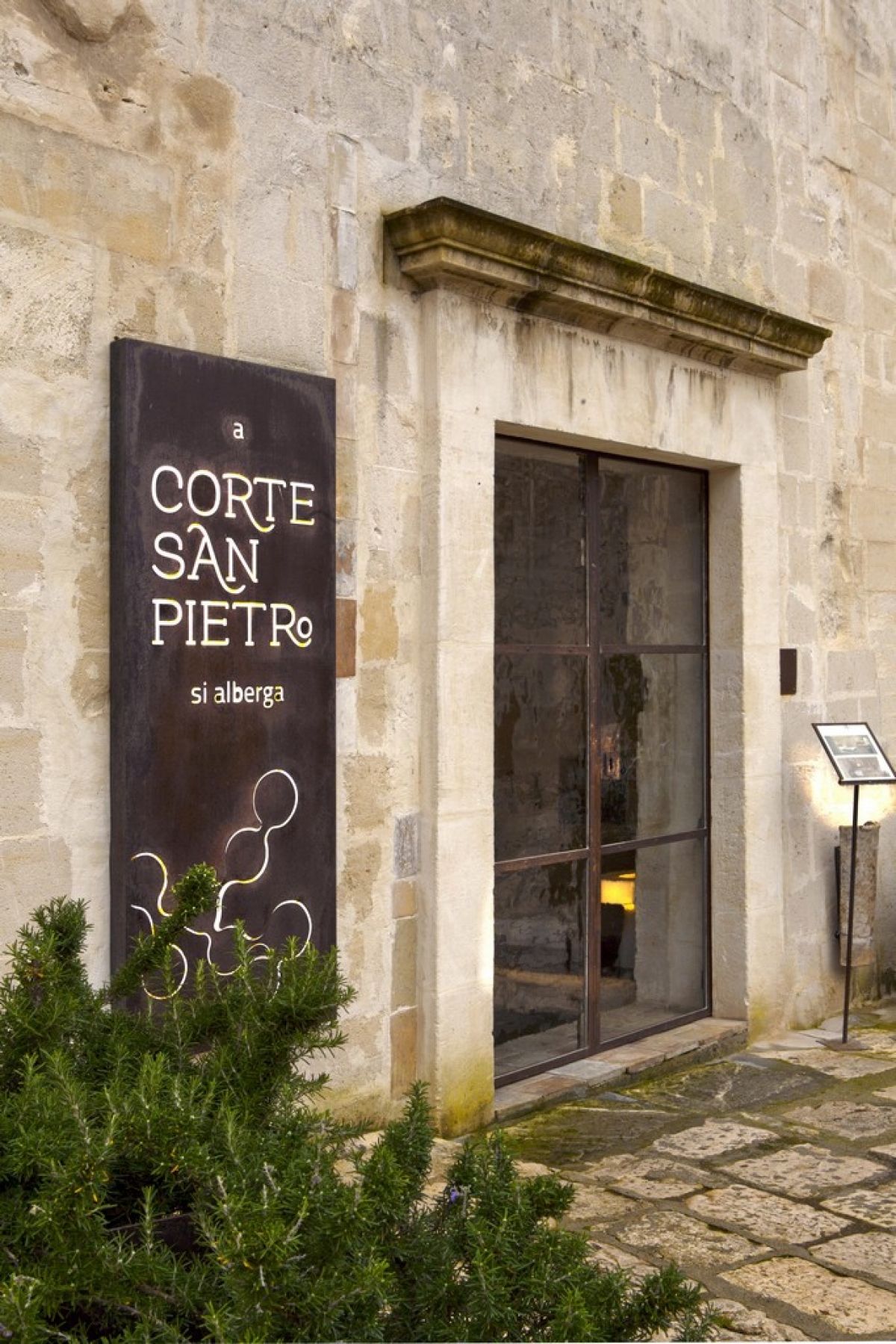 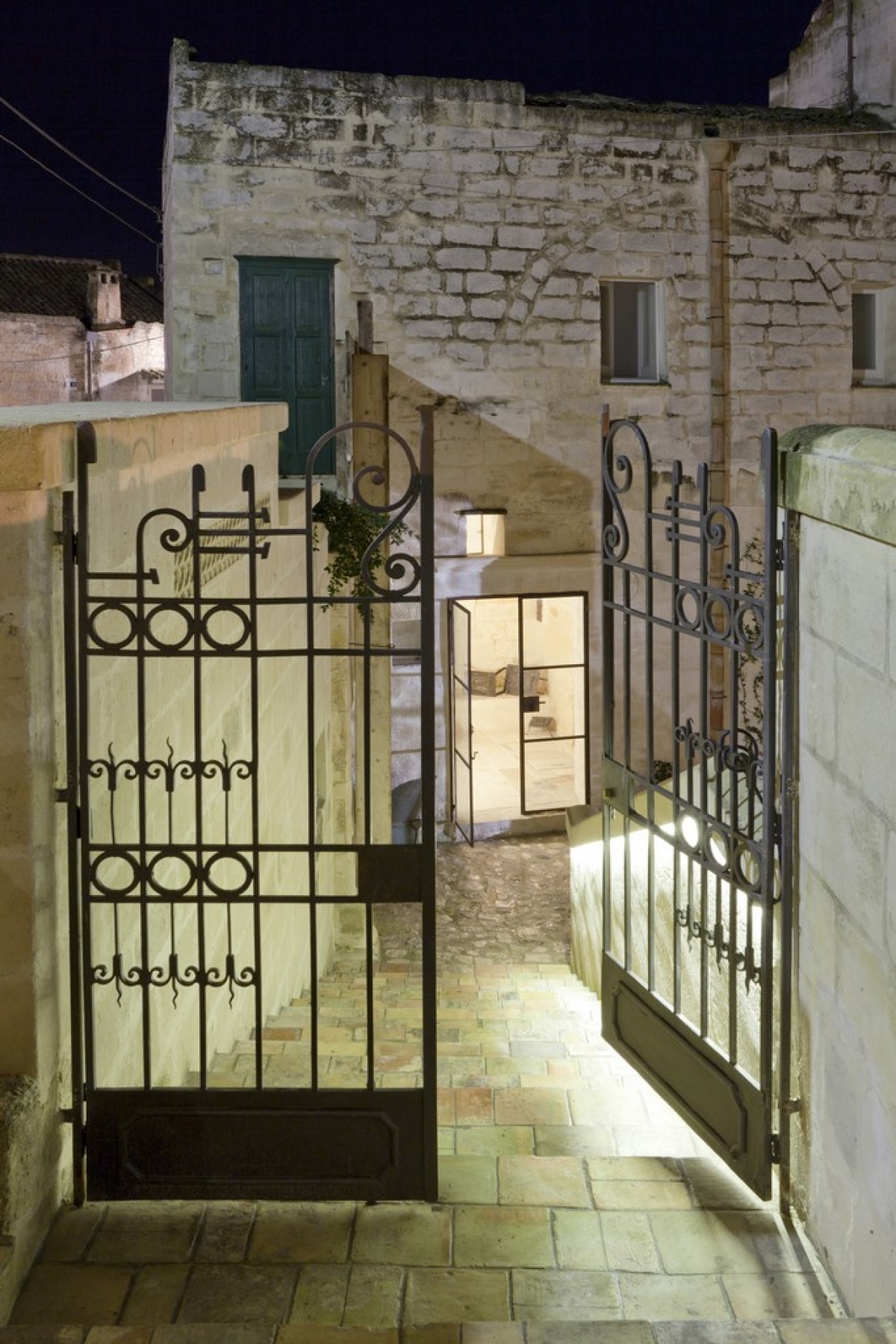 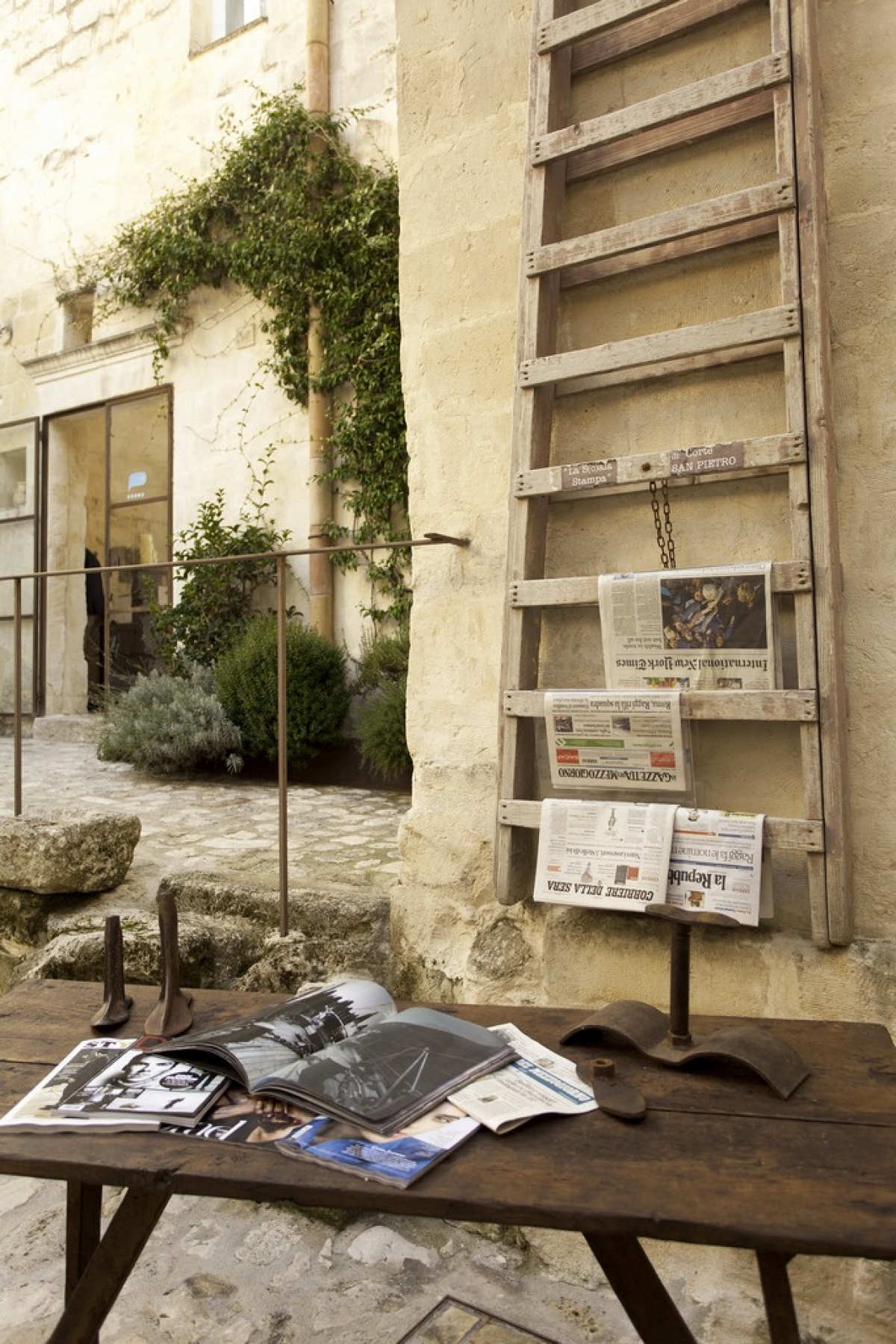 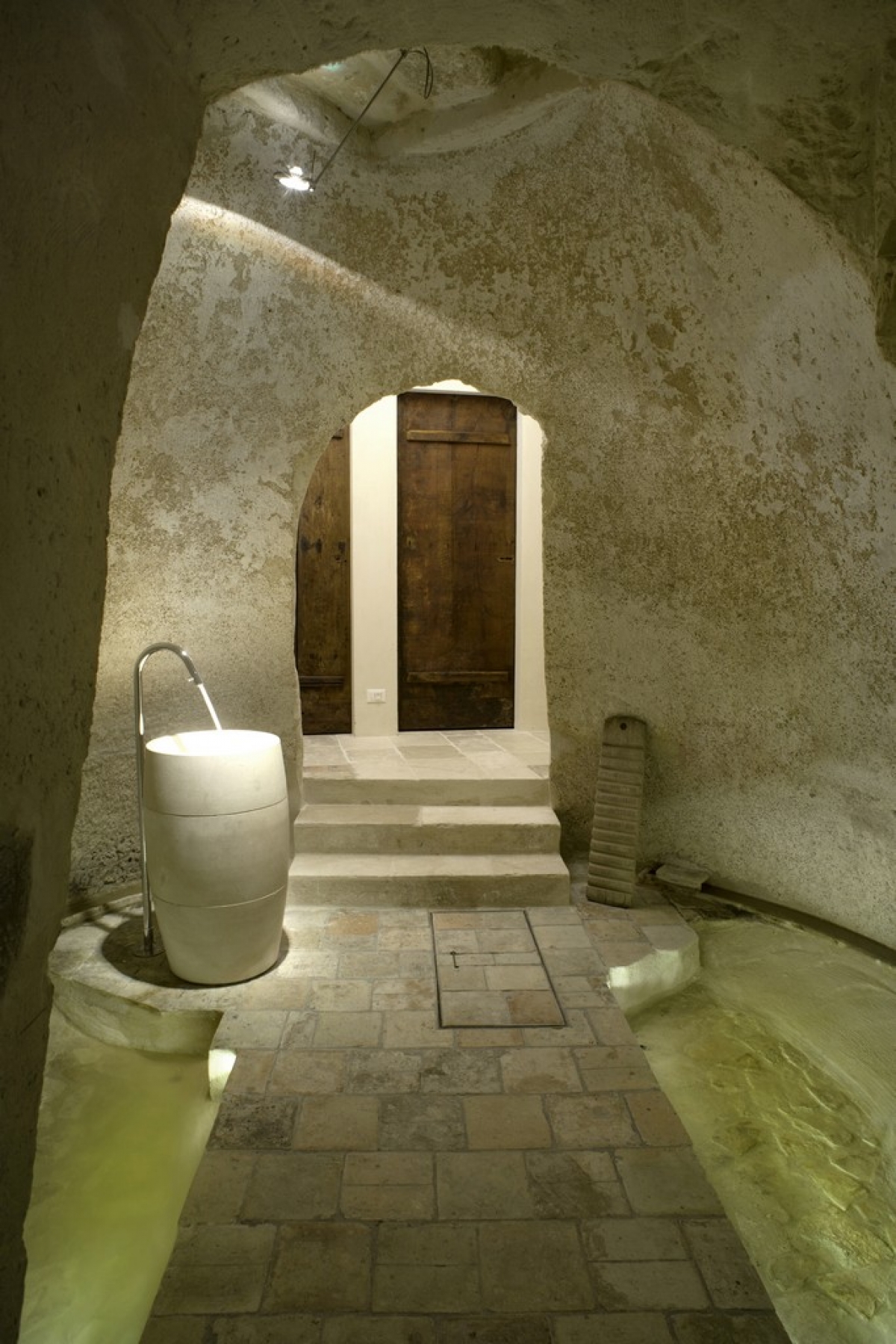 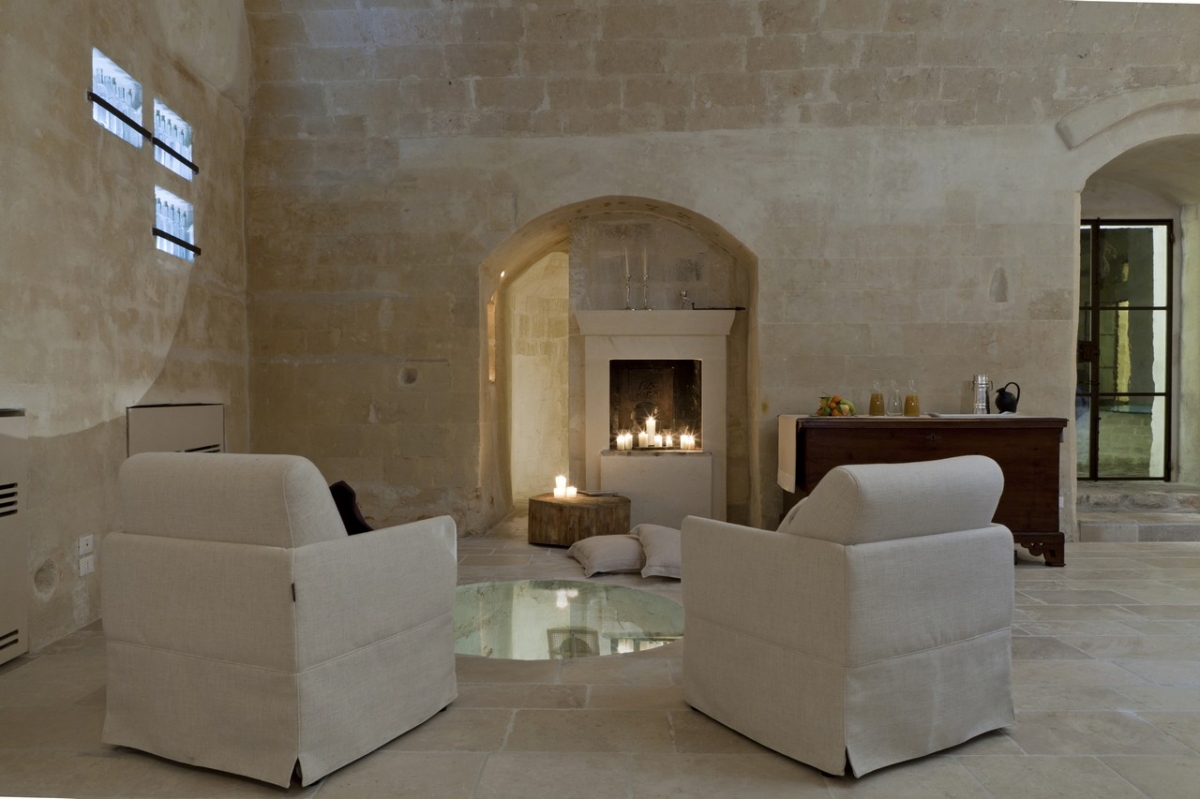 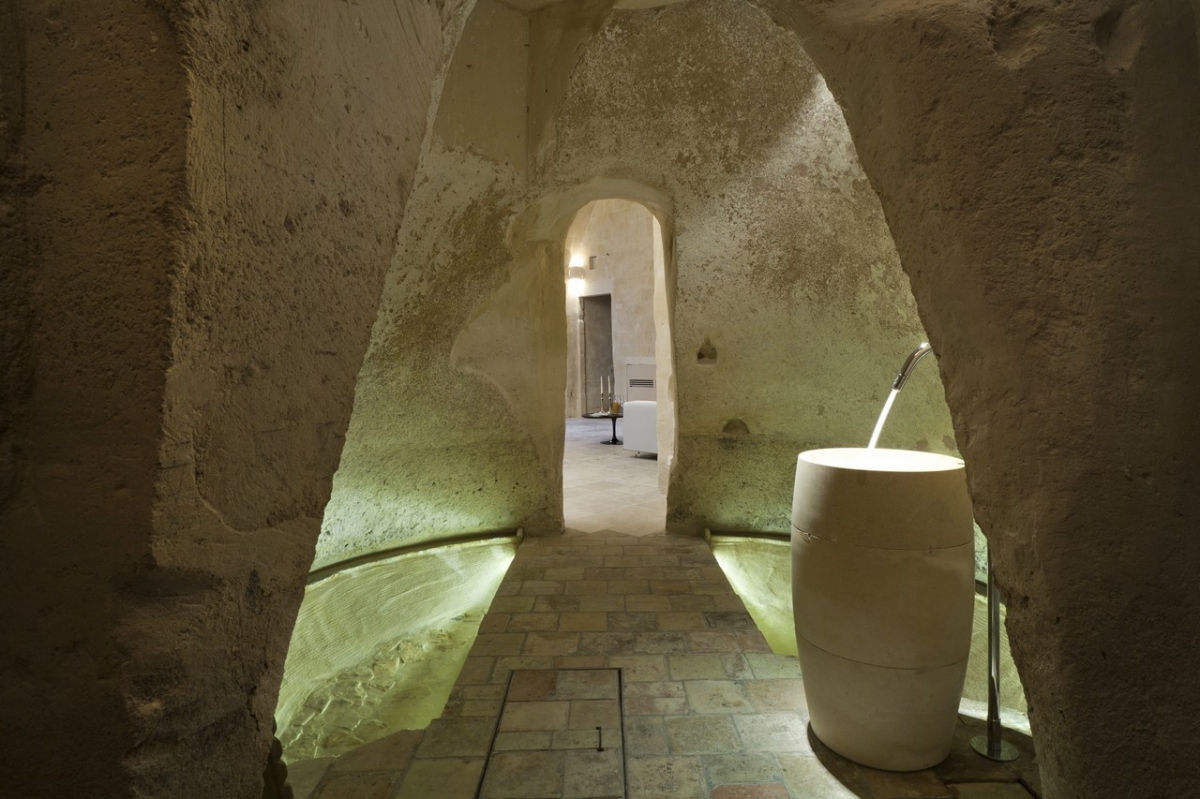 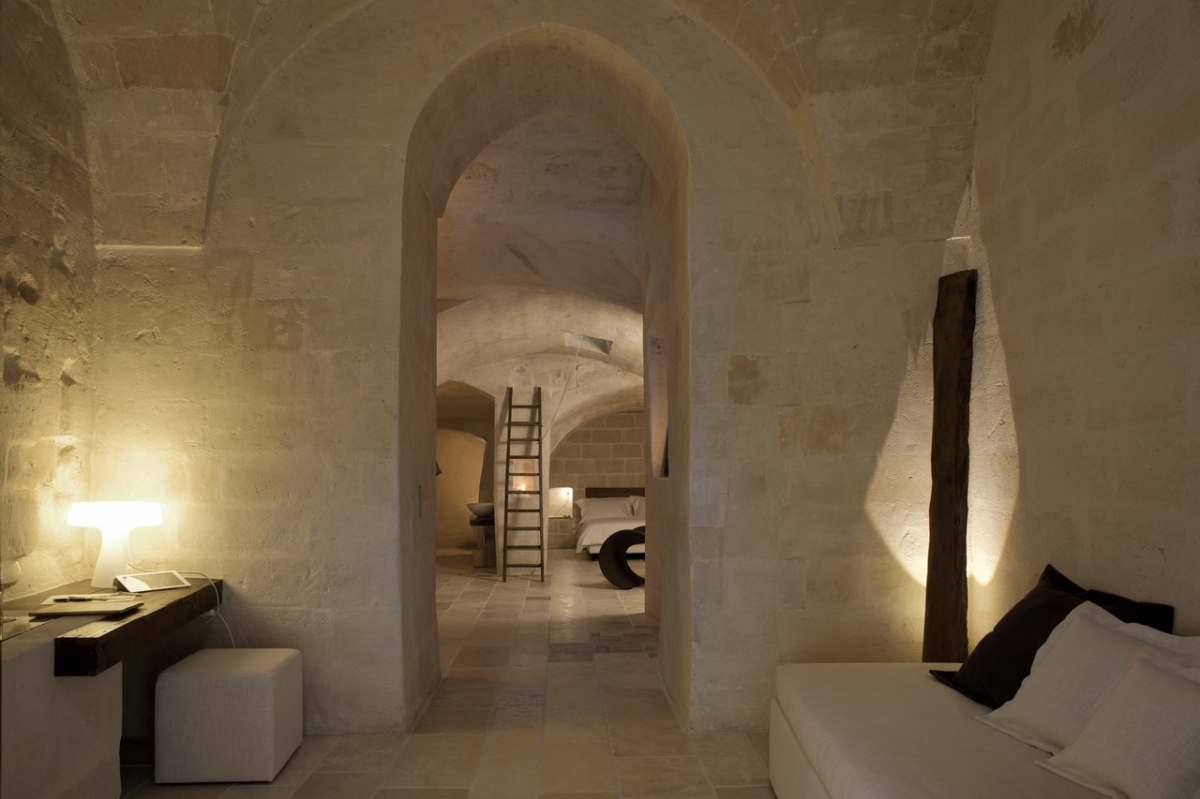 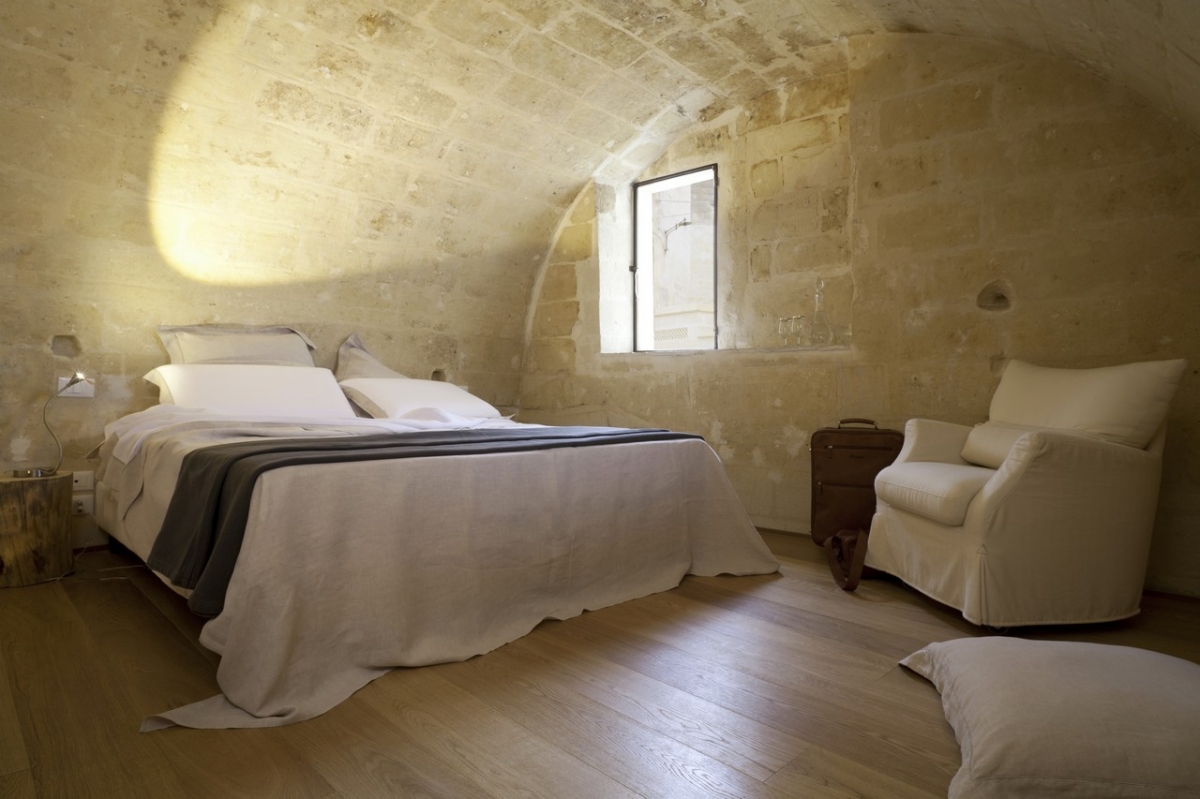 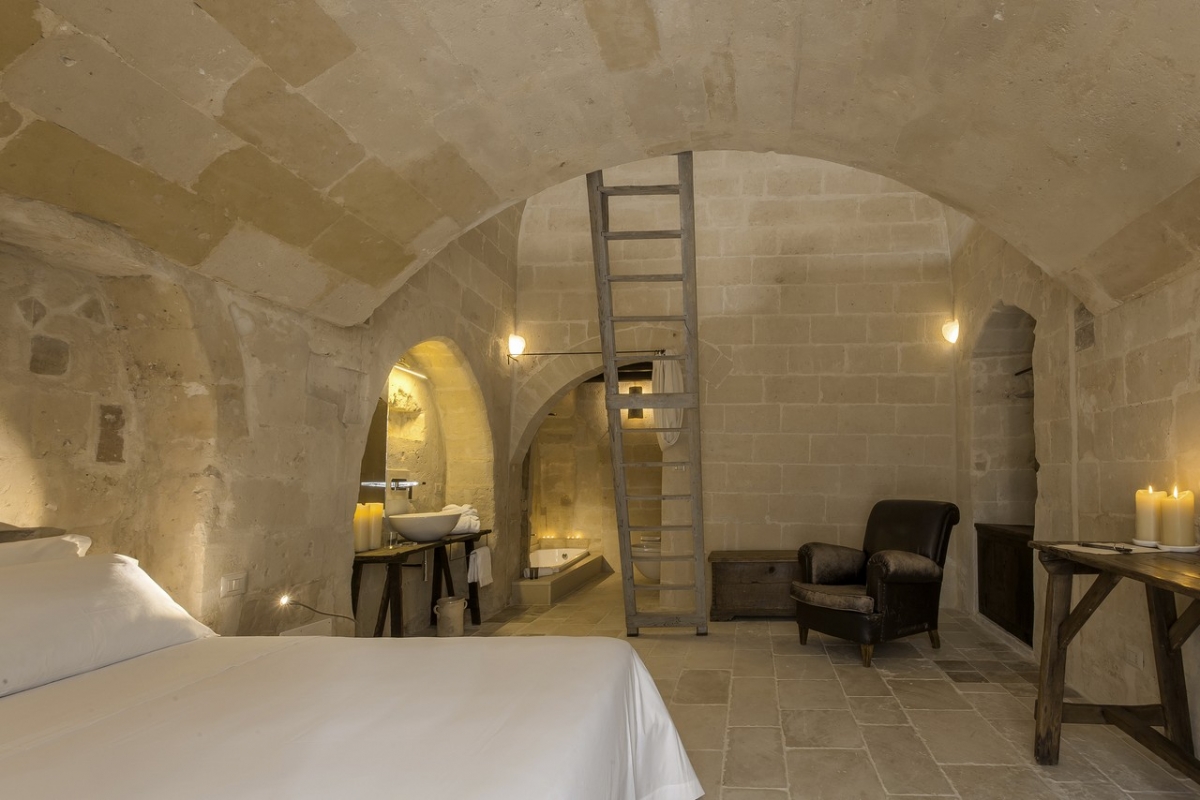 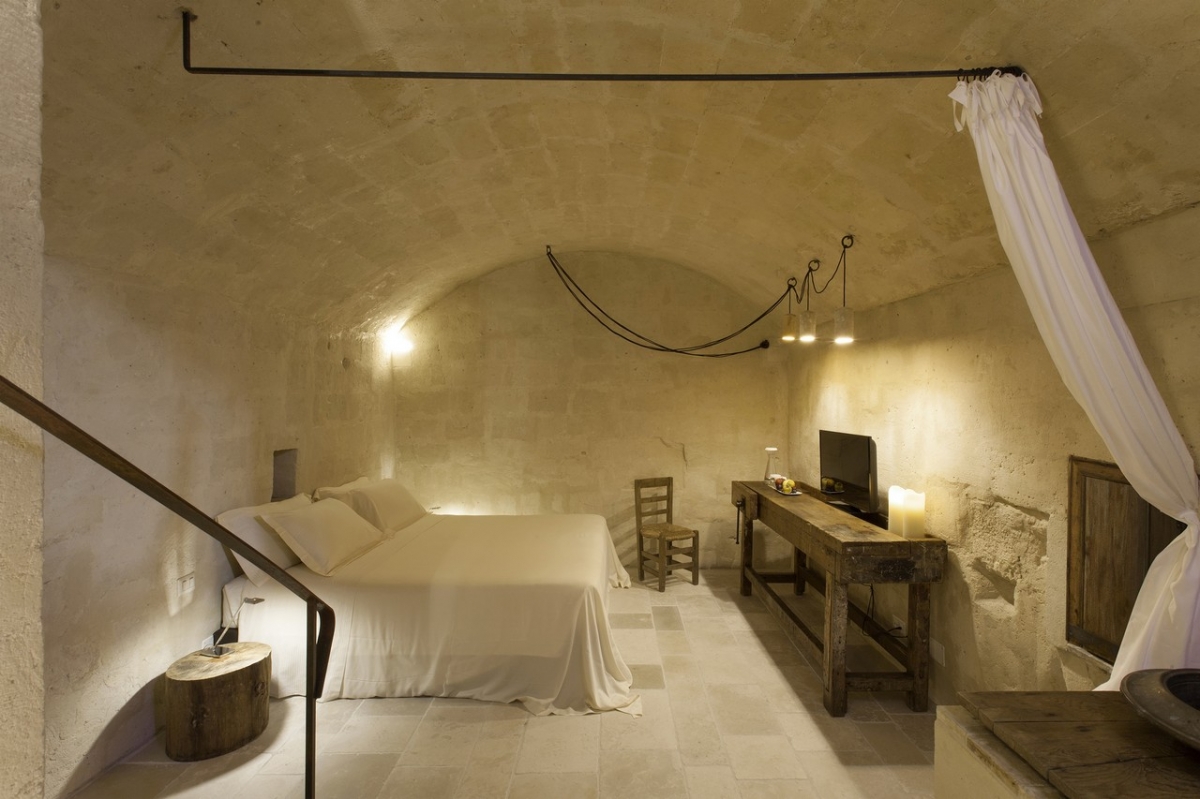 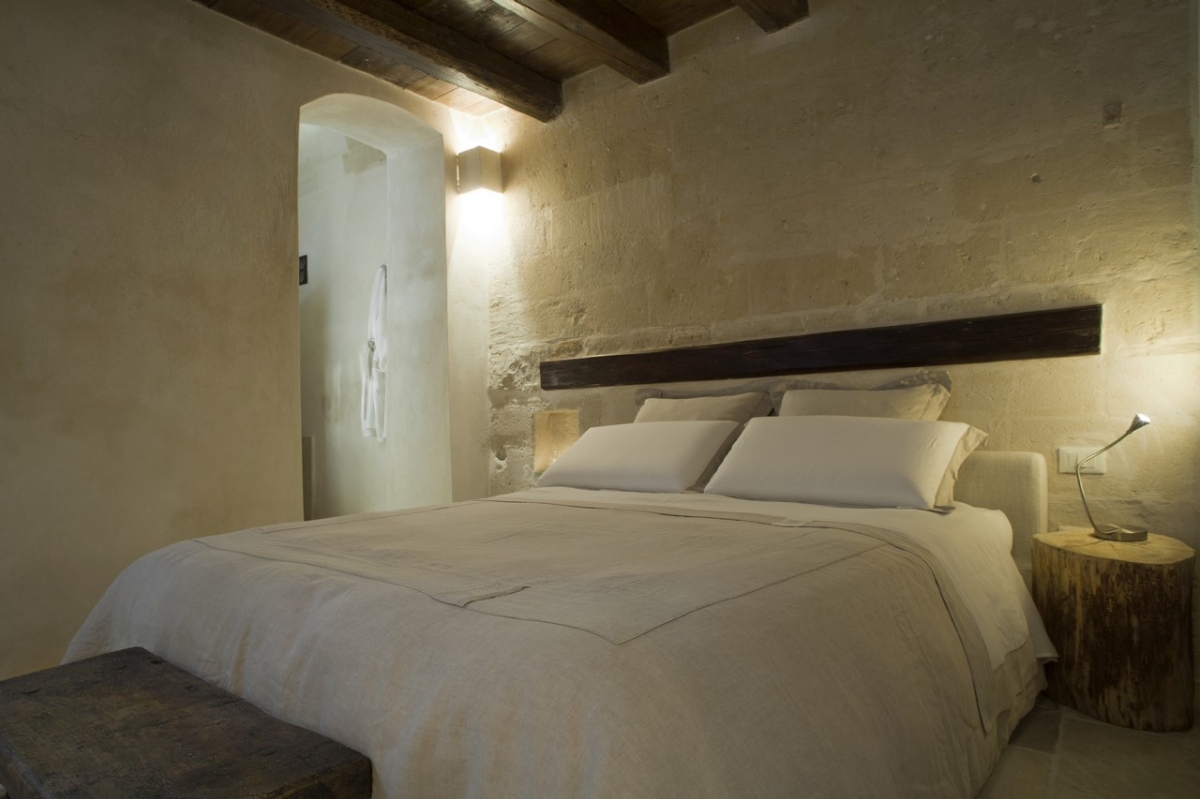 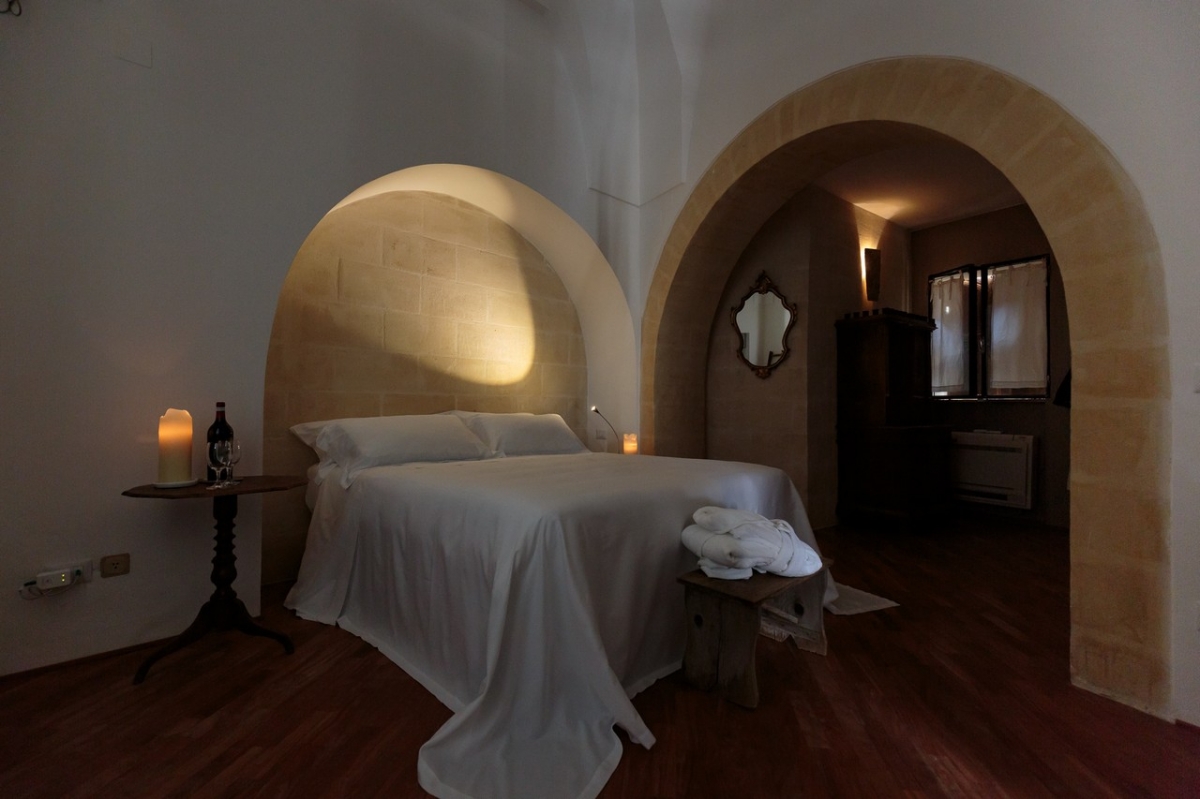 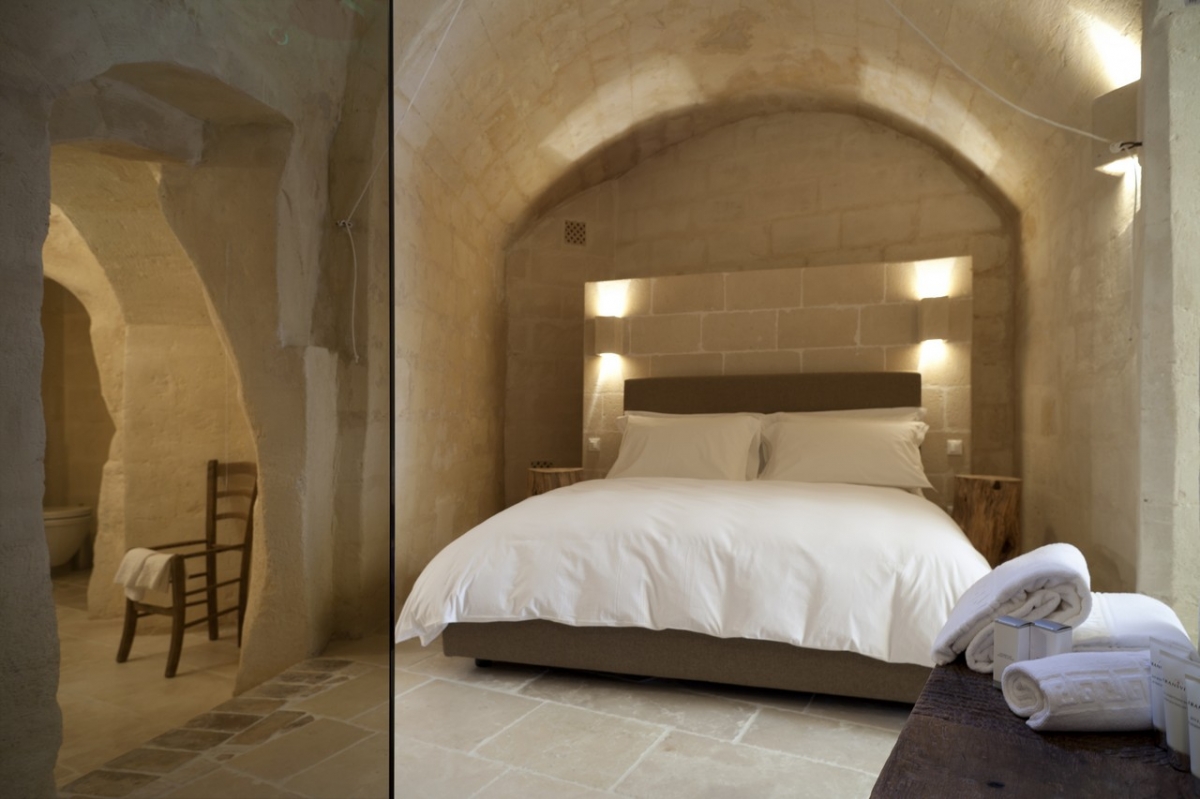 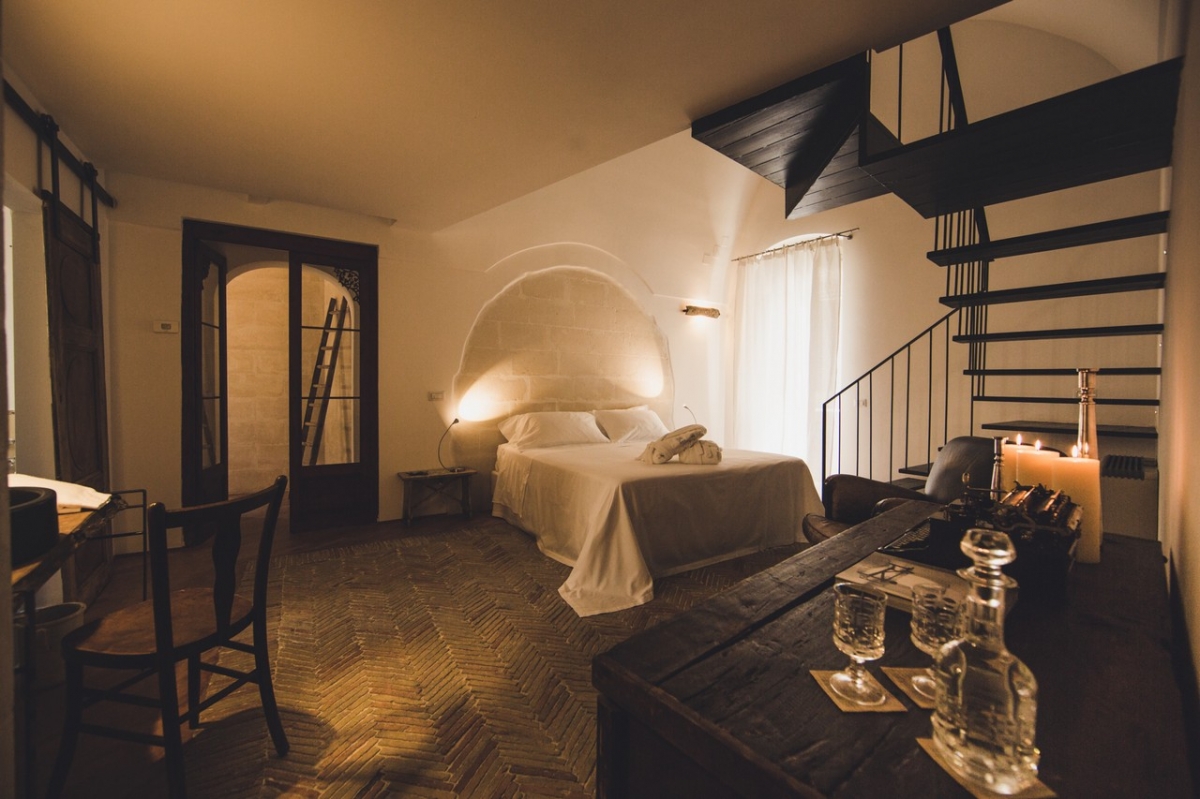 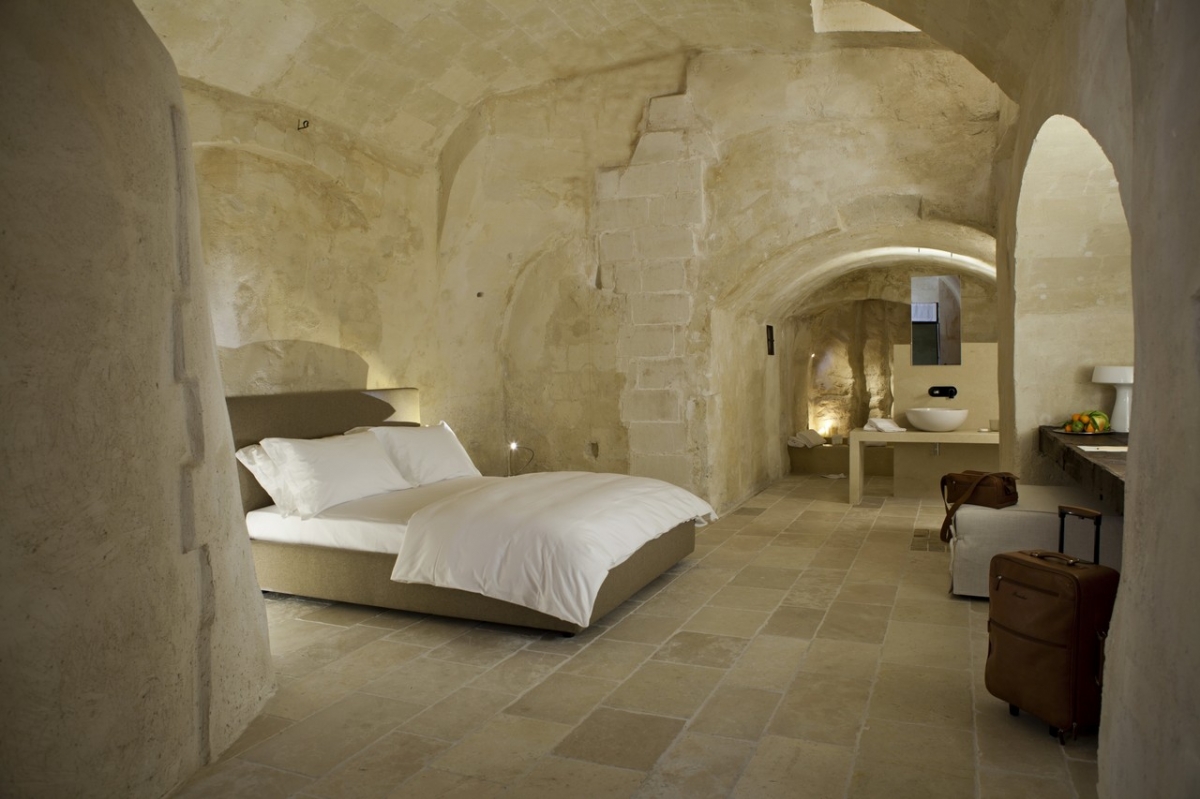 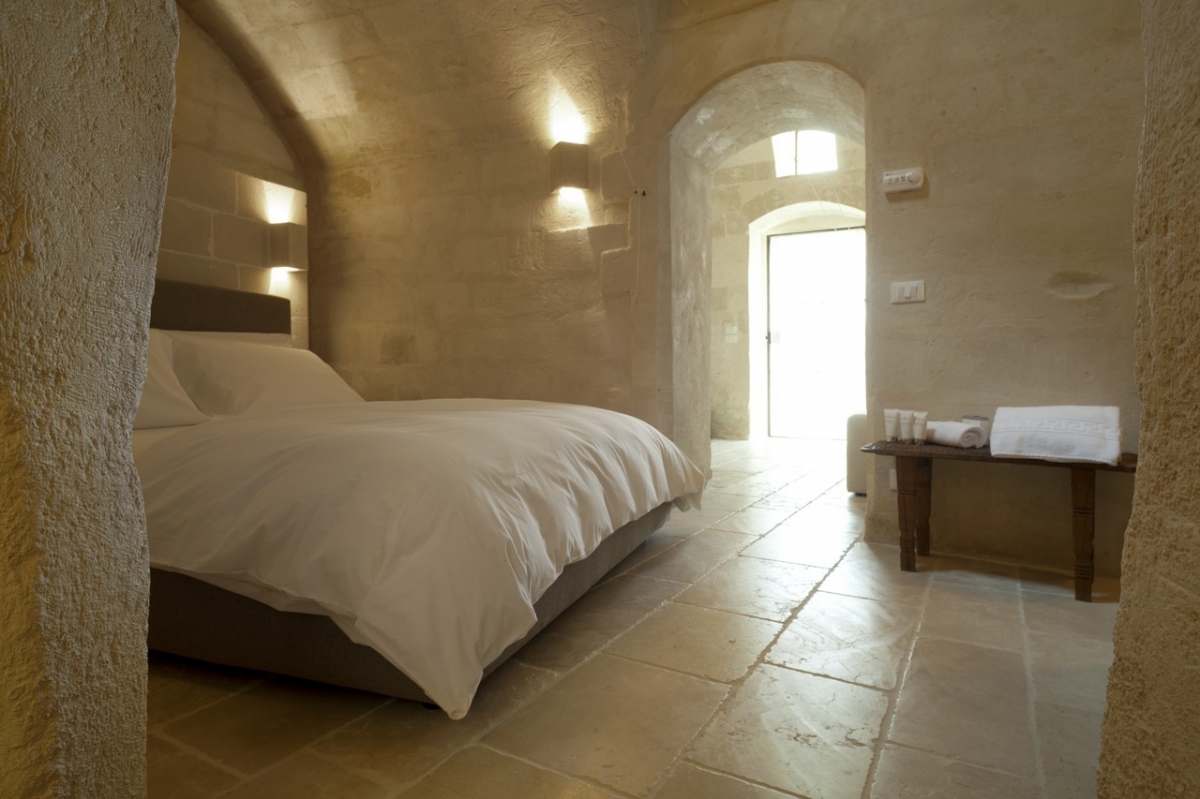 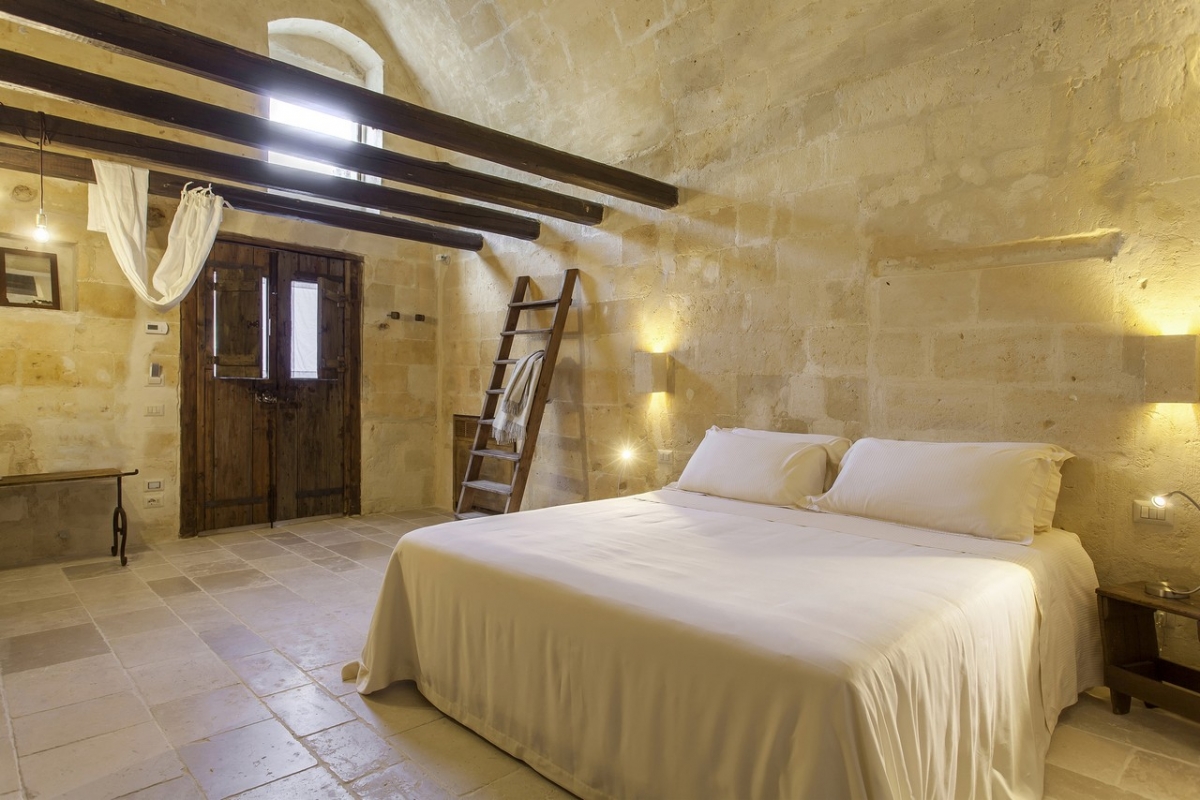